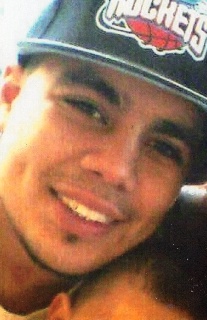 Biography: Visitation Services for Robert Villegas, 25, of Angleton, will be held in his honor on Monday, August 26, 2019, from 6:00pm until 8:00pm at Gardner’s Funeral Chapel, 507 W. Orange St., Angleton, Texas.  He passed away unexpectedly on Thursday, August 15, 2019 at his residence.  Robert was born Friday, June 11, 1993 in Angleton, Texas to his mother Blanche Gonzales, and his father Vincent Villegas, Sr.  He attended the Angleton Independent School District.  Robert loved his family, especially his children, whom he adored.  Robert will be remembered for his passion of cutting hair and tattooing, and will be cherished for the memories that we all are so grateful to have encountered with him.  Most importantly, he will be greatly missed by all who knew him.  Robert is survived by his wife, Michelle Esquivel-Villegas, his children, Robert L. Villegas, Jr., Roel Villegas, Reniah Villegas, Royce Villegas, and Raelynn Villegas; his parents, Blanche Gonzales, and Vincent Villegas; his siblings, Vincent Villegas, Jr., Amanda Villegas, Nicholas Villegas, Kevin Villegas, and Antonio Diaz, his grandparents, Gene and Josie Gonzales; uncle, Bubba Gonzales and aunt, Kim Gonzales, a host of other family and friends.    Final and Most Sacred Arrangements Entrusted to Gardner Funeral Home, 507 West Orange Street, Angleton, Texas (979) 849-6379. www.gardnerfuneralhome.net